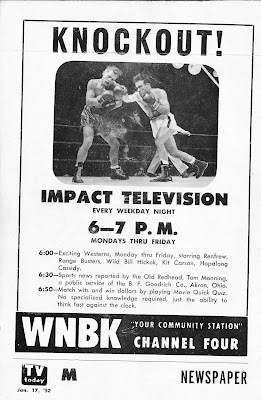 From TV Today January 1953:"Impact Television" ad for the 6-7PM weeknight WNBK offerings, including Tom Manning, who goes back to the 1930's at WTAM/WNBK 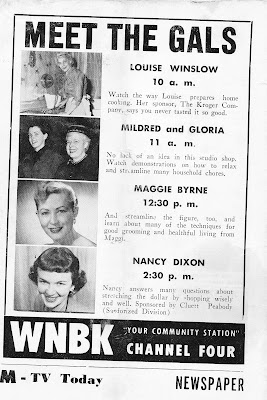 From December, 1952 TV Today:Ad for the "Ladies Shows" on WNBK-TV. Mildred and Gloria were also on WTAM Radio for a number of years..Gloria Brown was at channel 4, then channel 3 until the early 60's.. 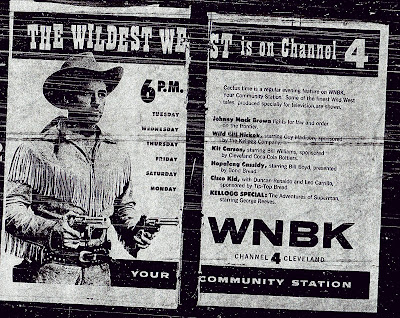 Full 2-Page TV Guide ad from 1953 showing the nightly at 6PM westerns block on WNBK-4. In the early years of television, western shorts were a staple of programming on just about all channels.

Second of a series on WKYC-TV's 60th anniversary..focusing more on the early 1950's.

As we said earlier, The first early-morning TV programming in Cleveland premiered January 14, 1952, with the debut of Dave Garroway's Today Show on NBC..Channel 4 was becoming established as Cleveland's "Community Station" with a lot of local programming..News was still an afterthought, with only Camel News Caravan and a five minute report at 6:45 and 11PM weeknights. Most everything was live, as announcers like Jay Miltner and Tom Haley did some newsbreaks and hosted shows throughout the weekdays at Channel 4..

Below is the programming schedule for April 19-25, 1952 for WNBK..About a year before upping their power and changing from Channel 4 to Channel 3..

7AM Today-According to TV Today, including national and local segments by Tom Haley, Today was three hours long..I suspect the Haley segments were called "Ohio Today" and the 9-10 hour was hosted by Haley in Cleveland-This was Today's fourth month on the air..


From Channel 3:50 Golden Years:Features on the early days of live TV with Tom Haley and host Del Donahoo..Carrying over to the Westinghouse Years..Material Copyright National Broadcasting Company, Westinghouse and Gannett

Our final 2 posts of this series will be Encore postings of earlier KYW/WKYC articles to round out the 60 year WKYC series..Also soon I will have a Ghoulardifest review and a Big Chuck! Book review..
Posted by Tim Lones at 9:26 PM