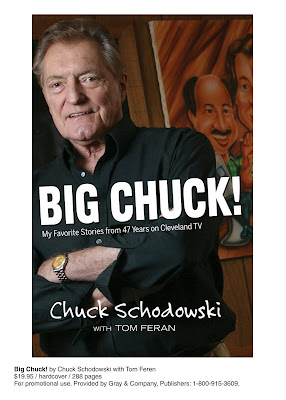 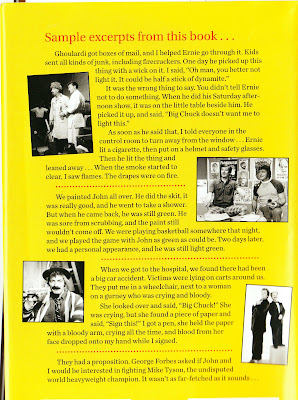 Back Jacket of "Big Chuck!" Courtesy Gray and Company


Tonight I'd like to review "Big Chuck! My Favorite Stories from 47 years on Cleveland TV" Published by Gray and Company, publishers of many books about Cleveland and it's personalities in the last several years. Written by "Big Chuck" Schodowski with Cleveland Plain Dealer Columnnist Tom Feran..

The Book reads as if Big Chuck is sitting next to a group of friends, having a cup of coffee or other favorite beverage. He tells of being a sickly youngster, growing up in the lower middle class Harvard/East 71st street neighborhood in Cleveland. He gained a good work ethic early in life delivering the Cleveland News, then the Press, before he was a teenager..

He tells of working in a Foundry for 8 years, befriending his black co-workers, who gave him appreciation for Jazz and Blues Music, which would be a hallmark of his early work on "Ghoulardi"

Realizing he ddint want to work in the Foundry for his whole adult life, Chuck took his first class radio license classes, one day a week for 3 years, Leading to a summer job as a Camera Operator for KYW-TV 3 in 1960. Despite some early mishaps, he won the respect of his TV 3 co-workers by the end of the summer. He was recommended for an engineer's job at WJW-TV 8. The bulk of the book, of course is about his career at TV 8, where he says he never was told he was a permanent employee.

Chuck tells of his special relationship with Ernie "Ghoulardi" Anderson, working behind the scenes with Bob Soinski..Contributing to the "Ghoulardi Show" from 1963-66
when Ernie left for California..The Ghoulardi/Big Chuck/Lil John All Stars when everybody had a good time, or else..LOL..some wild stories there..

Then to the Hoolihan/Big Chuck years, the skts (2000 produced over the years)..Celebrities Chuck worked with, that respected Chuck, even in doing silly things..Becoming producer/director at TV 8, even doing movies for Storer Television..

There are very good pictures throughout the book all put in their proper conterxt..
The Gray Co. description says that Chuck's writing style is "Cleveland to the Bone".
Very good description of Big Chuck, who says in the Introducktion he was "Born and Died in Cleveland"

This is an excellent book, especially if you are a fan of the WJW-TV 8 Horror Host tradition spanning 44 years..If one is just a fan of Local Television. this is a book you wont be able to put down. As much as Chuck told, there seems to be so much more he could tell in a second volume..

Look over some of their other books..A lot of Interesting Cleveland/Northeast Ohio subjects..
Posted by Tim Lones at 7:01 PM