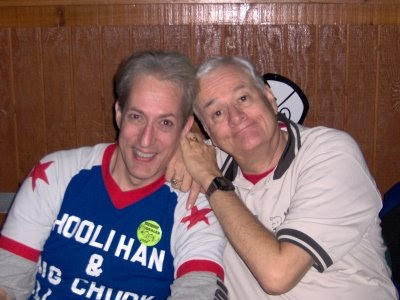 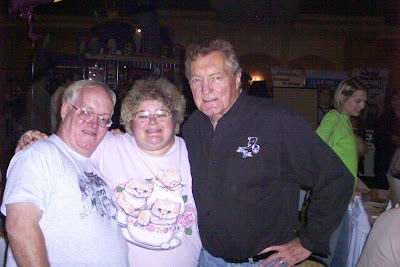 My wife Linda and I with "Big Chuck" Schodowski 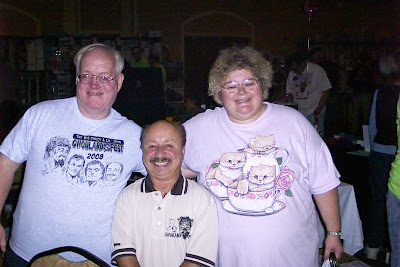 Just wanted to give a report on the Ghoulardifest October 17-19. It was a big success..I finally got to meet 3 men who have become heroes to me..Big Chuck Schodowski, Lil John Rinaldi and Bob "Hoolihan" Wells..They were there the entire weekend, and it was awesome..I was always told they were very approchable and friendly to fans, and that is so true..They do not act the "TV Star"..Very refreshing in this day and age..

There were lots of dealer tables, and despite the potential "horror tv" angle on
everything, it was all very much family friendly. Big Chuck's book was introduced that weekend, and is selling well on Amazon.com..My review of "Big Chuck" will be forthcoming soon..

There were several question/answer sessions, moderated by "Doktor Goulfinger". a California Horror Host/historian as well as stories by Chuck, John and Hoolihan..They were among the highlights of the fest..
A special time Friday Night was sharing in Bob Wells' 75th Birthday celebration..

Saturday Morning was a recreation of a Skit "Readings By Robert" With Bob Wells and Chuck..

Aside from the book...There are 2 more new DVD's that Big Chuck is selling..

The 1968 Show is special because..The Show was moved to Saturdays September 28, 1968. The Channel 8 Program Director wanted the show to die on Saturdays so he could cancel it..Parts of skits from 1966-68 are here in an "award show" format. Within weeks the resulting controversy moved the show back to Fridays.

I have to credit the folks at the bigchuckandliljohn.com website, who did a lot of the Festival organizing, and especially Promoter Ron Garsteck, who put it all together..There is already talk about Ghoulardifest 2009..We'll keep you updated..

Personal note:It was great to meet Mike and Kris While and family, as well as several of the bigchuckandliljohn.com regulars..


Recreation of "Readings By Robert" with Hoolihan and Big Chuck. Chuck relates how they did this once on the air....Live..Because Chuck and Hoolie were mad at the TV 8 General Manager..Chuck said they would just deny it, because it wasnt on tape..
Also compliments Hugo Sleestak..
Posted by Tim Lones at 1:20 PM