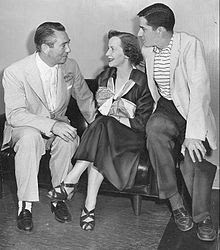 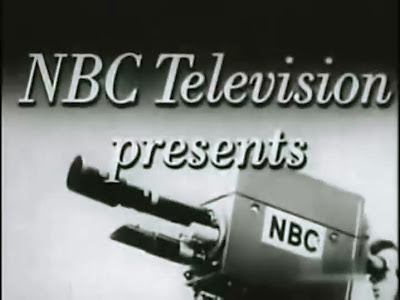 Slide shown when an NBC show was filmed or Kinescoped for later airing.. 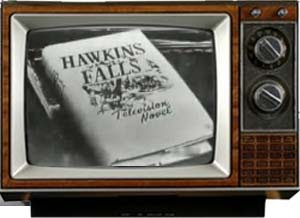 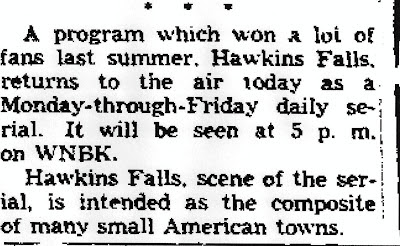 Short blurb announcing the premiere of Hawkins Falls as an afternoon Soap Opera on WNBK-TV 4 weekdays at 5 beginning April 2, 1951, after spending the summer of 1950 as a Prime time hour drama..


Today we'll take a look at soap opera "Hawkins Falls"..The NBC soap is considered by most as the first tv soap opera that lasted very long.(it was the longest running Soap at the tile of it's cancellation).

The show actually premiered June 17, 1950 as prime time drama and lasted in prime time till October 12, 1950.. The show returned April 2, 1951 as a 5-a week daytime drama, produced live at NBC Chicago..From the episodes I've seen, it seems to be a very low key drama, which veered into gentle comedy on occasion, as witnessed by this October 21, 1953 episode:
Hawkins Falls October 21, 1953-NBC by TLones1480
Hugh Downs was the Announcer at this point, later replaced by "Wed" Howard..

The show starred Bernardine Flynn as heroine Lona Drewer..Flynn was a veteran of Chicago based radio..Others in the cast were Jim Bannon, Maurice Copeland and Arthur Peterson..comedian Tom Poston appeared in the cast during 1953..Other known actors were Hope Summers and Art Van Harvey..Van Harvey and Flynn were radio's "Vic and Sade."

The official title is "Hawkins Falls, A Television Novel"..The show originated live from Chicago and was known for the stars sharing witty sayings at the beginning of the program (In Hawkins Falls, People say...)

The theme was a rousing rendition of "Skip To My Lou"..Shows how much tamer (and clean) soap operas were in the 1950's compared to today..
Posted by Tim Lones at 3:21 PM 2 comments: