The Original WUAB-TV Logo..Variations of this logo were used into the Mid-Late 1970's. From TV Guide 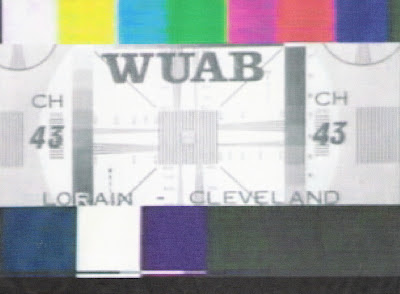 Screen grab of the WUAB Test Pattern Slide-Used from 1968 till probably the station went 24 hours..courtesy You Tube

When Channel 43 hit the air in September 1968 as the second UHF commercial station in Cleveland, you would think that with WKBF-61 already well established with Kaiser Broadcasting ownership and a 9-month headstart, WUAB-TV would be at a distinct disadvantage..But with Cable already penetrating parts of the Cleveland/Akron/Canton market and United Artist's deep pockets, the field evened out rather quickly..WUAB-TV also went much more into local programming from the start with shows such as Lorain Conversation, hosted variously by Cleveland TV veterans Alice Weston and Linn Sheldon. Barnaby, coming over from WKYC-TV 3 was also hosted by Sheldon. News updates were provided by announcers Gary Short and Marty Sullivan. Radio veteran Jack Reynolds did local wrestling shows and also served as a staff announcer.. John Lanigan's Monday-Friday "Prize Movie" was a hit for many years..Sullivan created his trademark character "Superhost" as a host of Saturday horror movies..beginning in 1969 for a 20-year run..

Sports was always important to WUAB, with Ohio State and Notre Dame replays early on..The station then served as flagship station for Cavaliers Basketball on and off from 1973-present and WHA Cleveland Crusaders and NHL Cleveland Barons Hockey in the mid-1970s..The station's biggest coup in sports was grabbing the over the air broadcast rights for Cleveland Indians Baseball from WJW-TV 8 beginning in 1980..Keeping the Indians till 2001 when the Tribe moved all their games to Cable..

WKBF-61 did almost no local programming or sports, which was part of their downfall..It was also hard with 2 competing stations for both to make much of a profit..Kaiser shut down Channel 61 in 1975 and purchased a share of Channel 43 with UA keeping the majority interest. WUAB then took of the best channel 61 syndicated shows and began to establish it's dominance in the NE Ohio independent TV Market.

Kaiser Broadcasting sold its stations in 1977 to Field Communications..At this time, UA/Kaiser sold channel 43 to Gaylord Broadcasting, which continued to bolster channel 43's profile, putting the station on cable outlets in several states..WUAB moved into its Parma studios in 1970..remaining until the mid-1990's.