In the last few months I've become aware of a portion of the newsnet5.com (WEWS-TV 5) website known as "Video Vault"..TV 5's Tom Livingston digs out old film footage to share with everyone and he has found some real gems..The one drawback is that much of the earlier films are missing the soundtrack, but the memories are there..I want to share on the page today two of the recent Video Vault entries..


Christmas 1960:Santa In A Spaceship..One viewer thinks this is from Bailey's Department Store. We also get a look at the Sterling-Lindner Christmas Tree and a brief glimpse of Johnny Mathis, who sang for the City Tree-lighting ceremony November 25, 1960.. 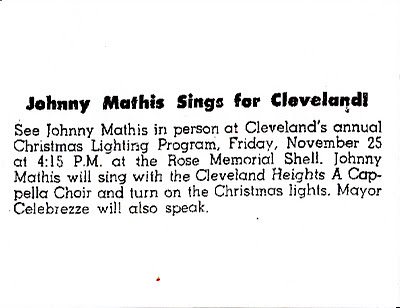 Portion of a May Company ad announcing the appearance of Johnny Mathis in Cleveland..