Wednesday, December 23, 1964:The Adventures Of Ozzie And Harriet:"Busy Christmas"..This was actually a repeat of the December 19, 1956 episode, with a newly-done opening by the Nelsons, with Ricky Nelson singing "The Christmas Song" at the end..Aired on WEWS-TV 5 and sponsored by The Gas Industry.. 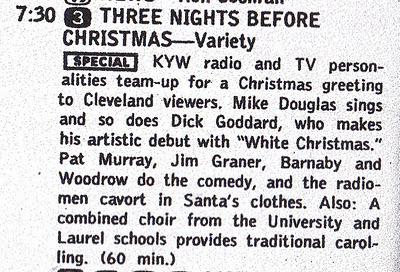 Christmas Comedy and Music Special produced by KYW-TV Tuesday, December 22, 1964..Looks like a good time was had by all.. 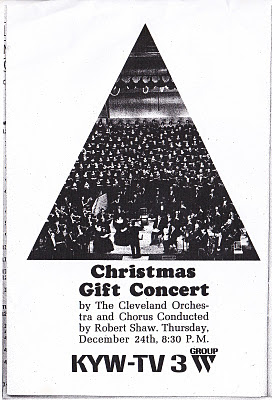 A little bit of Christmas 1964 is featured, with KYW Radio and Television leading the way during Christmas week with a couple of special programs and a 6-hour extravaganza on radio. When TV and radio were creative and really wanted to make holidays special..I only wish that either the radio or TV special might be out there somewhere..Also featuring Ozzie and Harriet in a repeat of a 1956 episode with 1964 vintage commercials for the Gas Industry..

The features on the Facebook page today about Mr. Jingeling really took off..Lots of people responded..Just goes to show that some folks really like Christmas the way they remember it..Appreciate the response..

Images courtsy the Plain Dealer Archive and TV Guide..Video from the Internet Archive..
Posted by Tim Lones at 9:39 PM