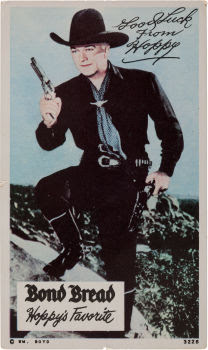 Picture Postcard of Hopalong Cassidy, distributed by Bond Bread..The other side had "Tune In Hopalong Cassidy on WNBK-4"..Hoppy was starting his Radio Show Jan. 1, 1950 on Mutual-WHK..The Hopalong movies and TV shows started being shown later in 1950 on NBC..

Football Bowl Games on WGAR-1220, Including the OSU-California Rose Bowl Game from Pasadena..

January 2, 1950 from the Plain Dealer.."Folksinger" (not Country Music Singer) Eddy Arnold had his own weekday morning show on NBC-WTAM 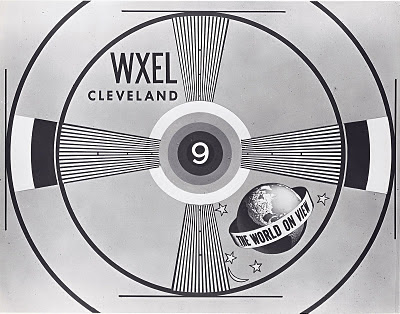 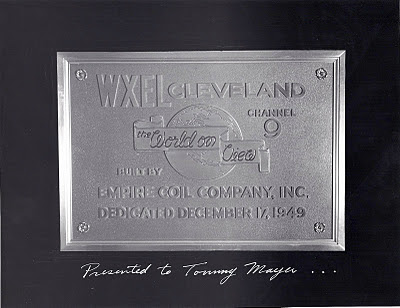 WXEL-TV 9 Dedication plaque-Cleveland's Third TV Station had been on the air less than two weeks..

George Condon wrote in his Plain Dealer Column on December 31, 1949 about the possibility of The Cleveland Orchestra making it's debut on Television January 8, 1950 on WNBK-4..Radio broadcasts on WTAM and several other stations were to commence then, and it was planned to have an experimental TV relay during an Orchestra rehearsal from Severance Hall to the NBC Building on Superior Avenue using a Microwave reflector on top of Severance Hall, hoping to get the signal to a dish at WNBK/WTAM..Sohio was to sponsor the Radio/TV Broadcasts
beginning 1/8/1950..

A Narrative Review of the last 50 years in Cleveland was to be aired by WGAR December 31 at 1PM, hosted by Reg Merridew and Sid Andorn..

Talk about going through Material..It was figured out that Cooking Hostess Alice Weston of WEWS had gone through 1, 068 of her own recipies and 168 others from viewers since starting her program February 14, 1949..


Hopalong Cassidy was to begin his own Radio Show January 1, 1950 at 4PM on WHK. Cassidy (William Boyd) was already a huge Movie Star and would soon gain many more fans as his films hit Television..

Robert Kintner, who joined ABC (Blue Network) in 1944, was announced as President of ABC-Radio/TV, where he served until 1956..

CBS New Years Party with Ed Sullivan, Robert Q. Lewis and others on WEWS at 10PM 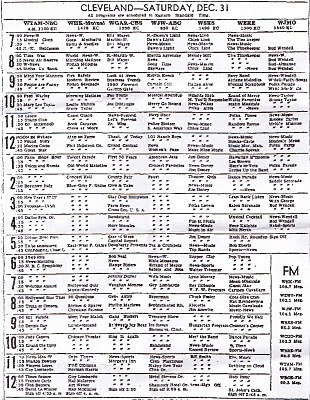 Later Today, Tomorrow or Monday we'll have a brief Classic TV "Year In Review" Post..Want to wish all our readers a Happy and safe New Year..
Posted by Tim Lones at 12:32 PM