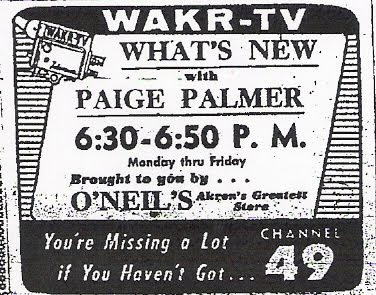 Paige Palmer, who was a native of Akron, also did occasional programs on WAKR-TV 49, in addition to the WEWS shows..Here is an ad from the Akron Beacon Journal February 28, 1955. 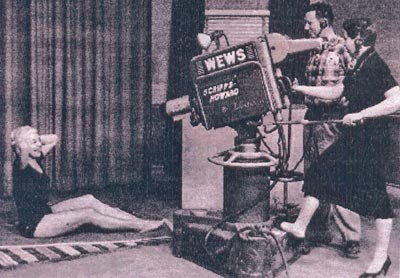 Paige Palmer on the air..The woman behind the camera appears to be Betty Cope..Early Channel 5 director and founder of Cleveland Educational station WVIZ-25. Image courtesy clevelandseniors.com


Early talk show hostess and exercise guru Paige Palmer-Ashbaugh,died early Saturday at the age of 93. Her talk/fitness program aired on WEWS-TV 5 from 1948-1973..She may well have been the first person to do regular exercise routines on television..She also taught Women in the arts of diet, grooming, health, fashion and beauty..She was preceeded in death by her husband Caryn Ashworth and is survived by three sons..Condolences to the family at this time..


WEWS Morning Exchange-December 1997..Interview with Paige Palmer..Fred Griffith and Connie Dieken..Apologies for the video/audio sync problems..
Posted by Tim Lones at 7:04 AM