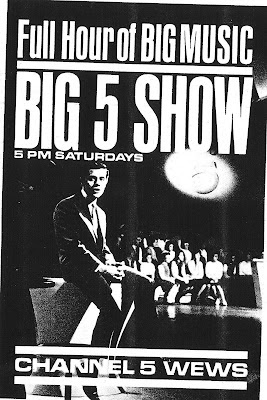 TV Guide for "The Big 5" Show with Don Webster in September 1965, a year before the name change to "Upbeat" and syndication

First off, I have added a permanent link to my YouTube Channel in the links at the left...
Second, I am in the process of adding to YouTube much of the content of "The Morning Exchange" from December 17, 1997..Channel 5's 50th Birthday..While many of the vintage TV 5 clips are repeated in the Anniversary Special that night, There are some classic Morning Exchange Clips as well. Joining Hosts Fred Griffith and Connie Deiken are many current (1997) and former Channel 5 employees such as: (Either on stage or in the audience)

There will be a total of 13 segments in all ranging from 3 to nearly 11 minutes. There are currently 5 segments up at the moment..I will add the rest in the next few days. Many wonderful stories about the old days at TV 5...