The Statler Brothers:Entertainers On and Off the Record..Now Hall of Famers 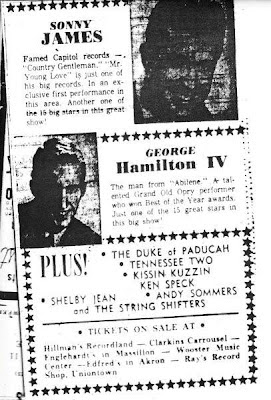 Canton Repository Ad for a Country Music Show sponsored by WCNS-AM 900 (WCER) March 9, 1964..It was at this concert the Statler Brothers began touring with Johnny Cash's Show which they did till 1972. (Though they were'nt on the bill..and Were'nt the Statlers yet, but the Brothers themselves point to this concert as their beginning with Johnny Cash)

Side Note:Notice the prices..and the talent on the program..No way would you come close to those prices for this kind of talent today..

Today's post is a tribute to the Statler Brothers..One of the most awarded groups in Country Music History..They started as a Gospel Quartet in their hometown of Staunton, Virginia..After hearing them at a Fair in Virginia, Johnny Cash invited them to be part of his road act, beginning in Canton, Ohio in 1964.

They remained a loyal part of the Johnny Cash Show even after their first hit record, "Flowers on the Wall" (1965) including Cash's 1969-71 ABC Variety Series Until the Fall of 1972..By this time the Statlers were having hit records on their own and doing their own dates apart from Johnny Cash and things got to be a bit hectic for the group.

After leaving the Cash Troupe the Statlers found their niche with Nostalgia songs such as Class of 57, Bed of Rose's , I'll Go To My Grave Loving You, and many more..They started filling arenas with their Family style music and comedy shows.The members of the group were


Harold Reid-Bass-The Comedian
Don Reid-Lead-The Spokesman for the Group
Phil Balsley-Baritone-Helped take care of the business end of the group
Lew DeWitt-Tenor (1964-82) Sadly, had to leave the group because of Illness..Died in 1990 from Crohn's Disease
Jimmy Fortune-Tenor (1983-2002)-Wrote two of the Statlers' Later Hits Elizabeth and More than a Name on a Wall..

Along with Their concerts, The Statler Brothers hosted a Christmas TV special(1985) and two other acclaimed 90 minute TV Specials in 1981 and 1983..Ultimately leading to The Statler Brothers Show on The Nashville Network from 1991-98. The Show was the number one rated show on TNN throughout their 7-year run..Possibly the only successful attempt at a general Variety show in the 90's on Broadcast or Cable TV..They retired from touring in 2002, though Jimmy Fortune is on his own as a solo artist.

While I admit the Statlers are a favorite group of mine, the reason for this tribute is that on June 29, 2008 The Statlers along with Tom T. Hall will be inducted into the Country Music Hall of Fame in Nashville..An induction that is long overdue in my mind..A really nice touch is that all 5 members of the Statlers, including the Late Lew DeWitt and Jimmy Fortune, will be inducted together..Ernest "Pop" Stoneman and Emmy Lou Harris were inducted earlier in a separate ceremony..


From a Johnny Cash TV Special in the mid 1960's..The Statlers sing the classic standard "Shenandoah"
"Flowers On The Wall" From The Johnny Cash Show-1970

The Statlers (With Lew) sing "Thank You World"

With the Cathedral Quartet at the Cathedrals Farewell concert..Introduction by Georger Younce..Noah Found Grace/The Other Side


The thing about the Statlers over the years..They stayed in their hometown and did things their way..And the fans remained faithful..

Special Thanks for the original You Tube posters for uploading the Statler songs in this post..
Posted by Tim Lones at 2:33 AM