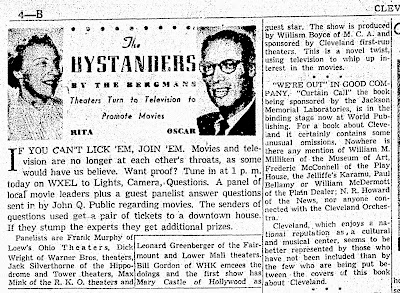 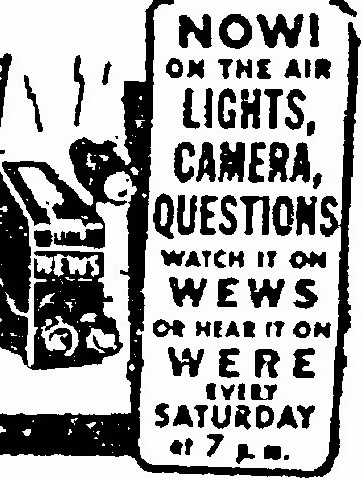 Ad in a "Hipp" Theater promo December 24, 1955
Today we'll look at another local Game show that had a long run on Cleveland TV, "Lights, Camera, Questions!" The show was sponsored by a consortium of Cleveland Movie Theater Owners who saw TV as a way to get people back in theaters... The show ran on and off for 9 years, until 1961. The show very popular among the movie going crowd and especially in the early years, drew Movie star guests, including Louise Baker, Betty Garrett, Larry Parks, Rock Hudson, Debbie Reynolds, Nina Foch, Melvyn Douglas, Jacques Bergerac, Joan and Jean Corbett, Marilyn Maxwell and Disney Art Director Roy Williams..

Like several local shows of this era, LCQ! changed stations every couple years..Including: 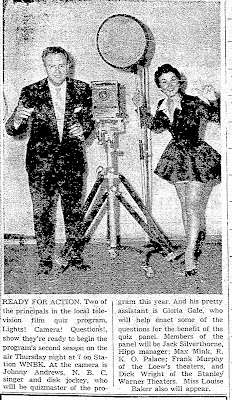 Host Johnny Andrews and Gloria Gale promote the 1953-54 season of Lights, Camera Questions on WNBK-4 Thursday Nights at 7PM..
As we said, the show lasted until 1961..There was a brief clip of it on the WJKW-TV 8 30th Anniversary show.. 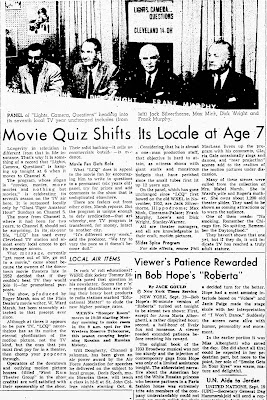 Here is the 1958 panel for the show..It never changed in the 9 years the show was on..At one point, this show was the second longest running local TV show in Cleveland, except for The Gene Carroll Show..
Posted by Tim Lones at 12:23 AM