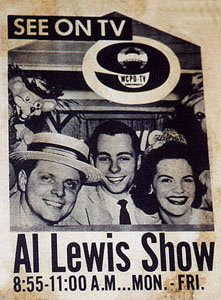 Newspaper Ad for the Uncle Al Show on WCPO-9 Cincinnati..This ad and the one below courtesy larrysmithpuppets.com 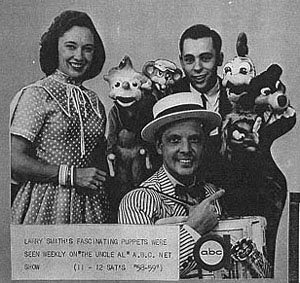 Cincinnati Kids TV Institution "Uncle Al" Lewis passed away Saturday Morning at the age of 84. He hosted the Uncle Al Show aat Scripps-Howard's WCPO Channel 9 in Cincinnati from 1950-1985,,Most of the time with his wife, Wanda. Both Al and Wanda were/are Cleveland natives. Mr. Lewis began his career at WEWS-5 Cleveland as an announcer and artist before he and Wanda moved to Cincinnati to help start up WCPO-TV in 1950..ABC-TV carried Uncle Al nationally at 11AM Saturday Mornings in 1959-60. For a time in the early 1970's, Uncle Al was carried on WEWS-TV 5. The Uncle Al Show was the longest running Local Kids TV Show in History..

While this is'nt directly Cleveland Related, I felt we should mention it because of his Cleveland Connections and the fact that he is an Icon in Southwestern Ohio..Best Wishes and prayers go out to his family..
Posted by Tim Lones at 2:46 PM