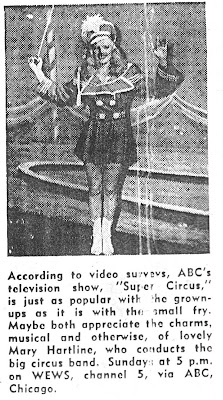 The lovely Mary Hartline of ABC-TV's "Super Circus", aired Sundays at 5PM on WEWS in early 1949. 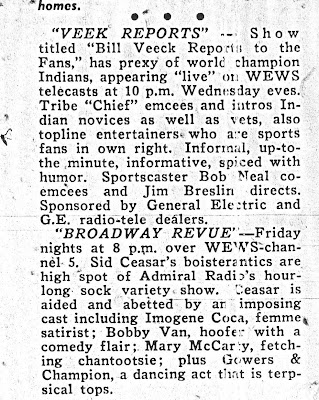 Channel 5 "Previews" of shows on during the week..While Tele-Vue listed both WEWS and WNBK, just about all TV program and preview ads were bought up by WEWS-TV..WEWS was even placed first in the listings, ahead of WNBK-4..These previews feature "Bill Veeck Reports to the Fans", with Bob Neal as host and Jim Breslin as the director..And Admiral Broadway Revue with Sid Caesar and Imogene Coca on the old DuMont Network..Interesting how these ads use what today is called "Variety-Speak"..With sayings like "prexy" "sock", "hoofer", "chantoosie" and "terpsical tops" 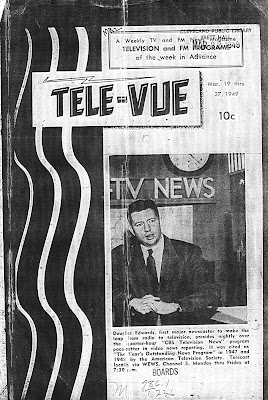 Cover for March 19-27, 1949 edition of TeleVue Magazine, featuring an early picture of Douglas Edwards in the CBS Newsroom..The "CBS Television News" aired on Channel 5 at 7:30 weeknights 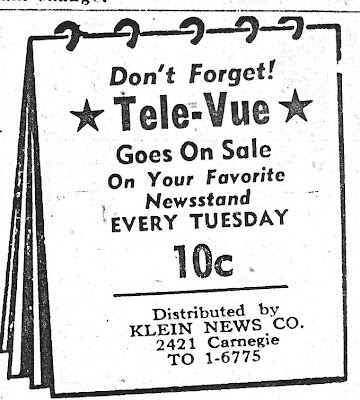 Ad for Tele-Vue, a 1949 TV Listings Magazine published in Cleveland 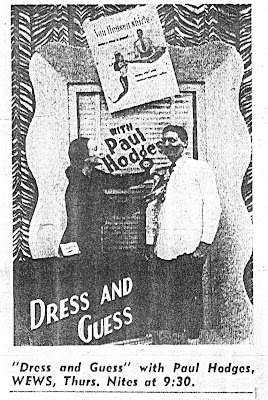 This time I want to feature Television in and around Christmas, 1948 using the Canton Repository. The Pictures above all come from Cleveland Public Library copies of Tele-Vue, from February-March 1949..The Repository, as most papers did at the time, played up radio, as radio was still a major form of entertainment for American Audiences..Television, if listed at all, had maybe a few lines of listings, if that..

Thursday, December 23, 1948 (Highlights:Not certain if this is the whole schedule)

(Schedule was listed exactly the same as previous night, which would seem unlikely so the following is based on a guess on my part as well as The Complete Directiory to Prime Time Network and Cable Shows-Brooks/Marsh-I'll try to find something more accurate in time)

I think this is very interesting in capturing the entertainment life of Cleveland at this period..
Posted by Tim Lones at 8:36 AM