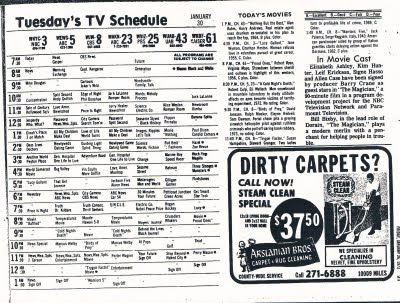 Plain Dealer TV Week Listings Tuesday, January 30, 1973..This was probably the best time for Local TV as you had two full-power Indys (WKBF-61, WUAB-43)fighting it out for audience..Cavaliers Basketball and Crusaders Hockey were both on Channel 43 with Frank Sweeney and Ted Patterson doing the announcing..Hadnt heard of them before or since..Paul Dixon aired on WKBF weekdays at 1..probably the first time his show aired in Cleveland since the DuMont Days..(1953-54). The note about the "Magician" movie is interesting in that it led to a series (1973-74) with Bill Bixby, as well as a lifelong interest in Magic for Bixby.. 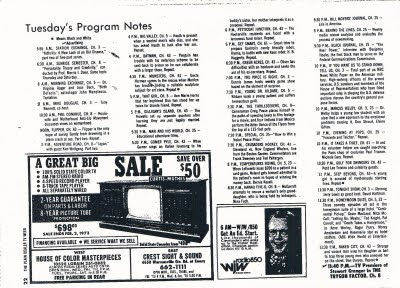 From Videoholic 1980's..Just under 10 minutes of TV News Bloopers, mostly from Cleveland but also from other TV markets..This would be from around 1980-81..

Within the next week or two, once I get my pictures developed, I'll give a report on the recent Ghoulardifest. At the same time I will review the "Turn Blue" Documentary..Near the end of November I will do a review on a new Christmas TV book written by a local author..
Posted by Tim Lones at 11:18 AM