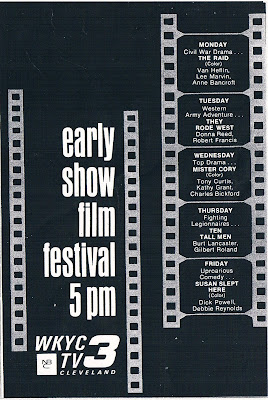 
Hello:
Anyone who has read Cleveland Classic Media from the beginning (March 2007) knows I have written a lot about NBC affiliate WNBK/KYW/WKYC-TV, especially detailing "The Swap" of WNBK to Philadelphia (as WRCV)and WPTZ/KYW-AM Westinghouse to Cleveland (As KYW-AM-FM-TV) in 1956 and the subsequent reversal of the swap in June 1965..The "Hello Cleveland" ad above was featured in local newspapers upon NBC's return to Cleveland. Several months ago, a reader wanted to see the full page ad, which was shown partially in WKYC anniversary specials. I found this at CSU, In their Cleveland Press Microfilm Collection, while in Cleveland Monday for other research..I thought also we would feature three random schedules from the early years of WKYC-TV..

8:30 Bob Hope Chrysler Theater (Convoy premieres at this time the next week)
9:30 Jack Benny-Last Show after 15 years on TV and 33 years on regular radio and TV-He would do specials after this (Mr. Roberts premieres the next week)

Brief clip on NBC's return to Cleveland..From WKYC's 50th anniversary special..The above ad (Hello Cleveland) is briefly seen..Dick Goddard relates how he came back to Cleveland within months of joining Westinghouse In Philadelphia..

Some more footage of Channel 3's 50th anniversary in 1998..Including a Tribute to the late Jim Graner, Sports anchor at Channel 3 from 1957-75 and radio voice for the Browns..

Comment:Considering the current state of this year's Cleveland Browns, one hopes that eventually the people put in the place to run the Browns show the class and dignity expressed by Mr. Graner in his lifetime covering the team..
Posted by Tim Lones at 2:29 PM