Tom Haley describing NBC's return to Cleveland in 1965..With a brief Dick Goddard interview about the circumstances behind his coming back to Cleveland. Courtesy NBC/Gannett 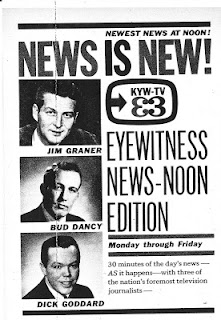 First TV Guide listing for KYW-TV 3 Eyewitness News at Noon Monday, May 1, 1961. One of the first, if not the first, full 30 minute local TV Newscast in the USA. The name "Eyewitness News" had been used at KYW-TV since April, 1959..They were the first station in the Country to use that title for a Newscast.. 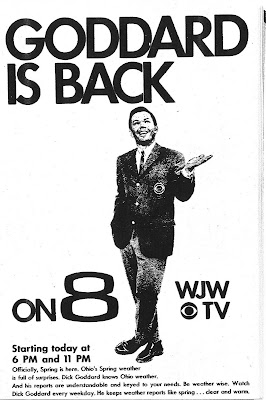 Dick's Triumphant return to Cleveland-March 28, 1966 as the main weather forecaster at CBS affiliate WJW-TV 8 after several months at KYW-TV 3 in Philadelphia..

Cleveland Weather forecasting has had as interesting a history as the Cleveland Weather itself..As in most TV markets, Cleveland has had an assortment of personalities doing weather foreccasts dating from the early 1950's. Most early weather forecasters, were doing weather as a sideline to other duties on TV and radio. Joe Finan, "The Atlantic Weatherman" was doing his thing on WNBK while doing radio on WTAM in the early 1950's..as was Captain Glenn Rowell, also on WNBK even earlier than Finan..WEWS-TV had "Weathergirls" such as "Sunny" Day, Susan Sadler and Miss Barbara Plummer, who was also doing "Romper Room". TV 5 also had Ron Penfound "Captain Penny" as weekend and sometime weeknight weatherman in the 1960s. The main Weatherman at WJW through the 1950's was Announcer Howard Hoffman, although Jim Doney and Doug Adair had done weather forecasts as well..Hoffman remained at TV 8 from 1949 into the 1980's.

May 1, 1961 would bring a number of firsts to KYW-TV 3.Possibly the first half hour local newscast in the USA..As well as possibly the first AMS Seal (No. 45) weatherman in Cleveland TV History,,Dick Goddard..

Dick was born February 24, 1931 in Akron, Ohio. After serving in weather related duties in the US Air Force in the early 1950's, Goddard graduated in 1960 from Kent State, majoring in Drama and Broadcasting..

Dick is also an avid cartoonist. He turned down an invitation to interview at Disney Studios in California, opting to stay in Cleveland and try his hand at TV on KYW-TV 3 with Eyewitness News starting Monday, May 1, 1961. Station staffers told him later that they had a pool going to see how long he would last..

Dick tells the story of his first day on the air, when he decided to tell a weather interest story about a Croaking Frog..Only he was so nervous, it came out "Froaking Crog"

After Dick got settled in, he became the most popular weatherman in Cleveland up to that time. The Other TV 3 newscasts in May 1961 included Bill Jorgensen at 6:30 and 11PM, Big Wilson doing Weather at 6:40 and Jim Gerard on Weather at 11:10..Jim Graner with Sports at 11:15..

Becasue of the forced return of Westinghouse's KYW to Philadelphia and NBC's WRCV (WKYC) to Cleveland, Dick Goddard went with Westinghouse to Philadelphia in June, 1965. He and his wife never felt comfortable in Philly. Thoiugh he says they were treated well, it was never "home" to them.. His replacement in Cleveland, Wally Kinnan, had been very popular in Philadelphia..

In early 1966, Goddard entertained offers from all 3 Cleveland Stations, electing to go to WJW-TV 8 because he was a big fan of the Browns and TV 8 sportscaster Ken Coleman, only Coleman left Cleveland a month later..He returned to Cleveland at Channel 8 March 28, 1966 as part of the City Camera News Team at 6 and 11PM with Doug Adair, Joel Daly and Coleman, later replaced by Frank Gleiber . Previous evening forecaster Bob "Hoolihan the Weatherman" Wells was moved to Noon and Weekend Weather before gaining even greater fame on the Hoolihan and Big Chuck Show, replacing Ghoulardi Friday nights in December 1966.

Goddard became the most popular weatherman in Cleveland TV History over more than 42 years at Channel 8..Emceeing live shows all over town, Hosting the Woolybear festival for 35 years..The largest one day festival in Ohio. He also has served as Cleveland Browns Statistician for many years, as well as doing numerous skits for Big Chuck and Lil John..

If any weather forecaster could be called "beloved" it would be Dick Goddard, at least in Cleveland and Northeast Ohio..

5:50 News
5:55 Farm Fare-Channel 3 had this program I think into the 1980's
6AM Tomorrow's Learning
6:30 Continental Classroom-COLOR
7AM Dave Garroway (Today Show)
9AM Funsville-Josie Carey was hostess of this program..similar to her earlier "Childrens Hour" at WQED-13 Pittsburgh, which she hosted with a young Fred Rogers before his fame as "Misterogers"..Funsville probably originated at KDKA-TV 2 in Pittsburgh, like KYW. a Westinghouse Station..

9:30 Life Of Riley
10AM Give N Take-Tom Haley
10:30 Play Your Hunch-COLOR-Merv Griffin
11AM Price Is Right-COLOR-Bob Kennedy begins a 2-week stint as host while Bill Cullen is on Vacation (Live)

Some Information courtesy Wikipedia and WJW-TV 8..
Posted by Tim Lones at 1:23 PM 3 comments: