More WJAN-TV photos from Ed Thomas..Thanks again Ed..I just decided it would be easier to make a separate post for other sets of pictures.. 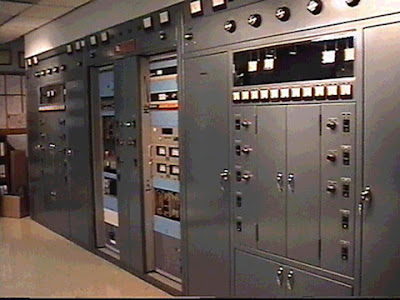 WJAN-TV Transmitter: building. I dont know much about electronics. I will admit, but even I can tell this is old..Was finally turned off Thursday night.. 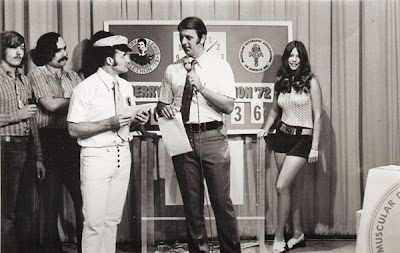 Taken at the 1972 Jerry Lewis Telethon.. The gentleman in the middle of the photo is probably "Milton The Milkman", who hosted a kids' cartoon show in the afternoons..Am not 100% sure, however..Also dont know who the man he is talking to is..Check out the young lady on the right..Little short on the skirt there.. WJAN carried the telethon till 1977..WOAC eventually took it over..With Scott Davis and Sherry Lee hosting..Ms Lee was also a long time WJAN personality.. 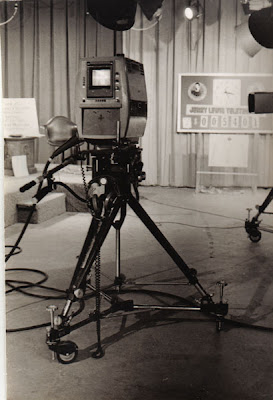 Early 1970's camera..Perhaps Ed or Cleveland Classic Media reader wbhist can tell us the make of this camera..This was taken at the 1972 Jerry Lewis Telethon
Posted by Tim Lones at 4:43 AM 21 comments: 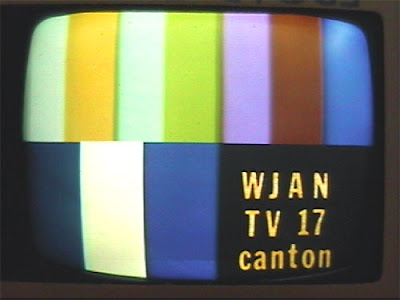 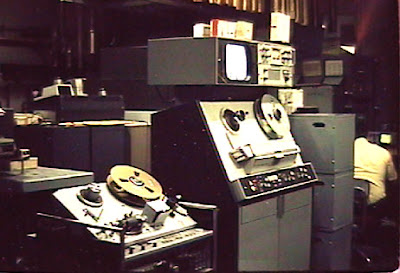 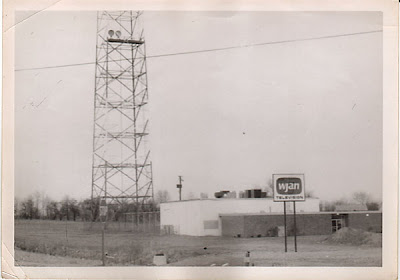 Some Newsy notes to end the week..

Original (and only) WJAN-TV 17 logo from its days owned by Janson Industries of Canton 1967-77..(Canton Repository Archives-Stark County District Library) 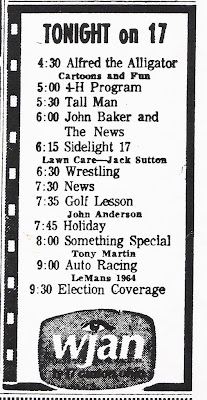 WJAN-TV schedule Ad for Tuesday, May 7, 1968 (Courtesy Canton Repository archives-Stark County District Library)
Good afternoon:
Just thought we'd mention a few miscellaneous items to end the week..
First:
WDLI-TV 17, Licensed to Canton Ohio since January 3, 1967, (WJAN 1967-82) shut down it's analog transmitter in Louisville, Ohio last night at about 11:59 PM, as part of a TBN-Network-wide shutdown of all its full-power analog services, ahead of the FCC June 12 deadline..No fanfare..just a simple announcement, then into more TBN programming at midnight-If anyone puts it on YouTube, we'll gladly share it, but it wasnt much to be honest..
Also:
According to Ohio Media Watch through other sources, Multicultural Broadcasting has sold its roster of stations, including WOAC-67 Canton, t0 Radiant Life Ministries, an arm of TCT Network in Marion, Illinois..Operated by Garth Coonce, TCT operates Religious stations in several locations, Including Jamestown, NY (Buffalo) Muskegon, Michigan and Greensboro, NC. It is expected Radiant Life/TCT will turn WOAC into a religious station..
Personal thought:While both full power Canton TV stations will now be religious, I prefer that somewhat to a full time informercial station..
Link to the OMW report:
http://ohiomedia.blogspot.com/2009/04/woac-sold-to-religious-operator.html

Speaking of OMW, he has started a "Mini Blog" as it were for reports on the Digital TV transition as it affects TV stations all over Ohio..Should be a good place to watch as June 12 gets closer..
http://ohiodigitaltv.blogspot.com/

One other note:My wife and I will be busy/out of town Tuesday-Thursday next week (April 21-23)..If I dont put something up before Tuesday, It'll probably next weekend or later before I do another post..
Posted by Tim Lones at 2:47 PM 4 comments: 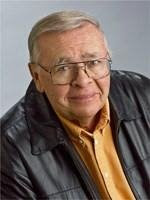 
Good Morning:
Former Radio/TV newsman Don Olson the other day made me aware of a new blog by Retired WJW-TV 8 reporter Neil Zurcher. Zurcher, famous for his "One Tank Trip" segments on Newscenter 8 and Fox 8 News from 1980-into the 2000's, has started a blog of his own.."Northeast Ohio TV Memories"

His goal is to provide pictures and stories of men and women who made Television in Cleveland from 1947 on..Though many of the first pictures came from Neil Zurcher's personal collection, he is inviting personnel from all Cleveland Stations to take part in the blog, as well as share their own personal memories of working in Cleveland Television..

It is good to see someone else, especially a Broadcast Veteran like Neil Zurcher realize that the Golden Age of Broadcasting in Cleveland needs to be preserved in some form, and we wish him the best of luck. I have already told Neil that he is welcome to any pictures here he can use.
Also, as of today, "Northeast Ohio TV Memories" will be part of our links..
http://neohiotvmemories.wordpress.com/
Posted by Tim Lones at 9:18 AM 1 comment:

Hello:
This last week (About March 30) marked our second anniversary here at Cleveland Classic Media..Would like to thank everybody for making the blog a bigger success than I ever thought it could be..From broadcasters, past and present, to just people sharing their memories about the 3-channel universe that was Cleveland Television for many years as well as some radio memories.

Here is an email I received recently from former Northeast Ohioan Rick Goddard of Laurel Maryland..

"I found your site a few months ago. Unfortunately I've been going
through it backwards...sigh. This messes up the flow, but I get the idea
:-) You are presenting me with memories from my childhood. These are
great! Please keep finding more of these gems.

I was born in 1951 (so I antedate you by a few years) in Alliance, Ohio.
My parents told me that neighbors would congregate in our living room in
the early 1950's to watch TV. The 16 inch Magnavox TV was the cat's meow
(this was a really big screen at the time), and an antenna on your house
was a status symbol. Some people put up an antenna (with no TV) just to
impress the neighbors! We had to use a double bay "Lazy X" just to get a
signal. The Youngstown stations weren't even considered at this time. No
UHF tuner.

We were 60 miles away so this was the fringe area for Cleveland. The
Magnavox TV (with real hardwood, I wish I still had it) became "my" TV
when my parents upgraded to a 21 inch TV (really big) for the living
room in 1958. I reveled in fact that I had my "own" TV in my room in the
late 1950's. We weren't rich by any means, but I guess TV was important.

I have a claim to fame by appearing on Uncle Jake's House. I suspect
this was in 1956 or 1957, but it was definitely toward the end of July
(my birthday). I was in the bleachers with my then neighborhood "girl
friend" Anita.

As a harbinger of my later engineering degree I loudly proclaimed from
the bleachers that the "door" on the set was fake. Gene Carroll seized
on that and invited me down to check it out. I remember very bright
lights and a painted canvas. I got to the "door" and was encouraged to
try the door knob on the fake door. I did. I'm told that my reaction of
"Awww" when I actually tried to grasp the door knob on the canvas was a
big hit. I now assume I helped Gene kill 2 minutes on his unscripted
show :-) It's a shame they didn't record any of this (who knew?--and it
wasn't worth using film anyway), but I'd love to see my 6 year old self
doing these stupid things!

I still can't believe that I'd watch Roller Derby (Sunday's at 1:30 or
so) or boxing (prime time). I now read a lot of books because Comcast
Cable (120 channels) has nothing on :-)

Your site brings back forgotten memories. I remember watching Jim
Doney's Adventure Road when WJW switched the program to color on a
Sunday afternoon in 1964. Of course there was nothing to see on a B&W
TV, but we watched (at my teenage urging) anyway.

I moved away from Ohio in 1973 after graduating from CWRU in Cleveland.
I went to Laurel, MD to make my "fortune". After 29 years of fortune
making, I'm now retired, but where's the fortune?...sigh. I'm doing
well, but being rich would be better:-)"

PS: Yes, from the 1960's until I moved I was often asked if Dick Goddard
was a relative (no, he isn't as far as I know unless it's many, many
generations past).


People such as Rick are exactly why we're here. Sometimes when I dont get a response from some posts, I wonder if it is worth it..Letters like the above tell me it is..
Thanks for the kind words, Rick!

When I talk about vintage broadcasting, a lot of what I write about transcends other interests, particularly sports..A lot of my memories stem from watching and listening to Cleveland Sports Teams on local TV/Radio from about 1970 on..I mentioned being an NBA Cincinnati Royals Fan in 1968-69-70 earlier..I also watched a LOT of bad Indians Baseball and Cavaliers Basketball..Was hard to take sometimes, but they were OUR teams..

Sportstime Ohio has done a great job for a relatively new network, already with Exclusive Indians and Browns coverage, as well as High School State Championships..Id like to see them do more Indians Classics, especially 1970's games originally on WJW, if available..

Sportstime Ohio will be debuting 2 new Indians Specials over the next few days..Indians Alumni Roundtable 1960's, with Max Alvis, Joe Azcue, Gary Bell and Mudcat Grant. The One-hour show debuted at 2PM April 2 will repeat at 8PM, April 3 at 6:30 PM and probably many times after that..

Indians Alumni Roundtable 1980's Debuts at 2PM April 3,repeat at 8PM and at Noon April 6 and again, probably many times after that..(Am recording it-will update the guests on Twitter as I find out..)

Both specials will be hosted by Indians PR Director Bob DiBiasio..Here is a nice story of how he got hired by the Indians:

This is the kind of progrmming I like to see STO do..Should be fun and interesting.. 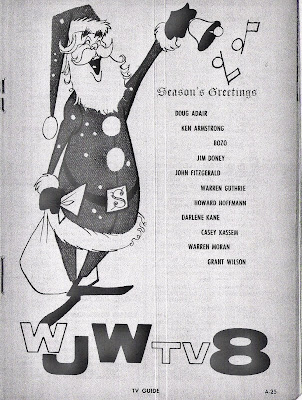 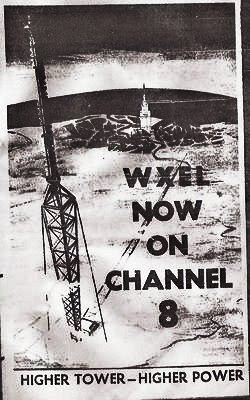