Ending of "Rudolph the Red Nosed Reindeer" with the Videocraft Logo

Ad for a 1970's rerun of "Mouse On The Mayflower" sponsored by McDonalds..This and the image below courtesy Rick Goldschmidt's Blog.. 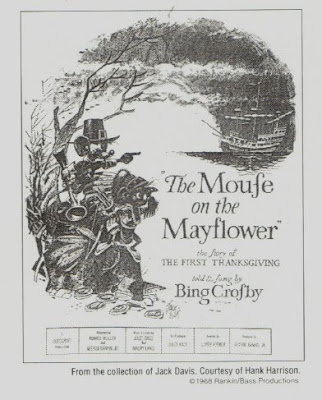 "Bing Crosby" Mouse on the Mayflower ad, when it was hoped he would do the program.. 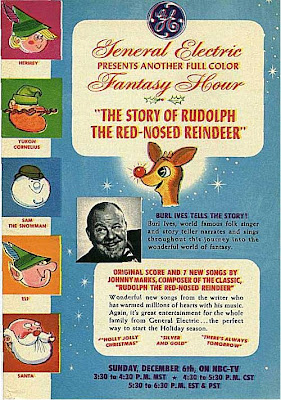 
Featured earlier:Original Mouse on The Mayflower opening from NBC-1968

Today I thought we would focus on the iconic Rankin/Bass Productions, the company responible for many of the most beloved Holiday Specials of all time, Including Rudolph the Red-Nosed Reindeer, Little Drummer Boy and a host of others.


Before this, Rankin/Bass produced a limited cel animation series of "Tales of the Wizard of Oz" in 1961 for national syndication. This series ran for several years on KYW-TV 3 in Cleveland on the "Barnaby" Show..

The success of "Rudolph" led to other specials like Cricket On The Hearth and Mouse On the Mayflower..Mad Monster Party came along in 1969..Frosty the Snowman and Santa Claus is Coning to Town premiered by 1970.

Other Series produced by Rankin/Bass included Smokey the Bear, animated series based on the Jackson 5 and the Osmonds, and their most enduring regular series, Thundercats (1985).

Rankin/Bass Fan and collector Rick Goldschmidt has written some books about the Rankin/Bass Phenomenon,and has what may be one of the better websites about any entertainment company out there.."The Enchanted World of Rankin-Bass"..http://www.rankinbass.com/..(Which will be put in our permanent links)..The site, with the full support of Arthur Rankin Jr. , is a treasure trove of facts about the history of Rankin/Bass,. Including some video and audio clips, and rare advertisements..Including one in which Bing Crosby was recruited/hoped to be host-narrator on Mouse On The Mayflower..The Role that went to Tennessee Ernie Ford..as Crosby turned down the offer..

One cannot imagine the Holiday Season without the likes of Rudolph and Frosty on our TV screens..and we have to thank Rankin/Bass for the great entertainment over the last 48 years or so..

PERSONAL NOTE:The Rankin-Bass Pages recently had a story about company founder Arthur Rankin Jr. being denied some 2.6 million dollars in profits from the use of this specials over the last 25 years or so by Warner Brothers because of a accounting error on Warners' Part..They refuse to pay Rankin on the basis that The 'statute of limitations' has run out..I generally don't try to comment on current events but this is just plain not right..More details and links on the Rankin-Bass Pages.
Posted by Tim Lones at 9:24 AM