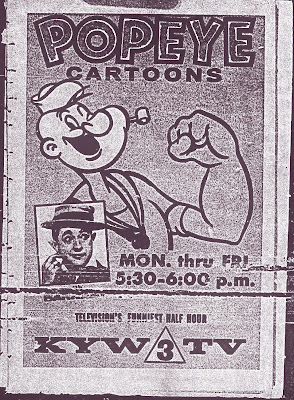 Early KYW-TV ad for Popeye Cartoons with Barnaby...Only having premiered a couple months before..As I said earlier in these pages, Popeye was aired continuously on Channel 3 from 1957-mid 1970's at least.. 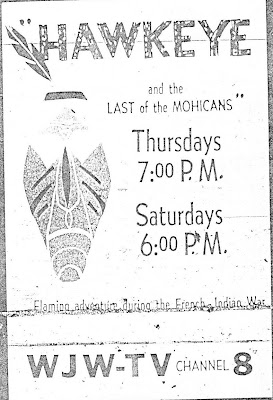 WJW-TV ad for the Syndicated"Last of the Mohicans" airing twice a week..Unusual for 1957..

A Pair of ad for part of the November-December 1957 CBS Lineup-Friday Nights-Trackdown at 8PM and Schlitz Playhouse of Stars at 9:30.. 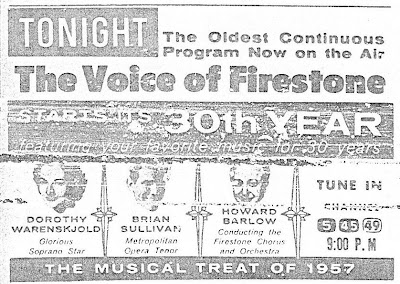 TV Guide:Ad for the "Voice of Firestone"Muisc/Opera/Fine Arts series..Originally on NBC Radio and Television from 1928-54..One of the few "highbrow" music series to have a long run on network TV..After it's cancellation by ABC in 1958, Firestone returned to ABC in Fall 1962 Sundays at 10PM but was cancelled again permanently in 1963.

Today we'll take a look at what was aired on my birthday, and during the week of November 30-December 6, 1957. just for the fun of it, (as all of this is, actually) something we did last year, highlighting 1960..This time, we will be looking at my avtual birth date in Canton, Ohio 12-6-57..

Editors Note:I do apologize for the not-so-good quality of the ads presented here. Quality of microfilm of early Magaines from Cleveland Public Library can be spotty at best, which is where I get most of my TV Guide listings from 1953-58....Sometimes you can only do so much with it..You can click any of the ads to read them a little better..
Weekday notes:
CBS-TV was trying to find a program to somewhat compete with the first hour of "Today"..In December 1957 Jimmy Dean held forth in the 7-8 AM hour with country music and variety..
WJW-TV had a Variety Show called "Good Idea", which aired from 8:45-10AM (Capt. Kangaroo was only 45 minutes in length).."Good Idea" was a program with guest interviews and music wrapped around syndicated sitcoms such as The Goldbergs, Halls of Ivy and Amos n Andy.


To conclude, I want to thank WIXY Grad for the kind Birthday greetings on his blog..Most of our next few blogs will focus on Christmas Season..My favorite time of the year..