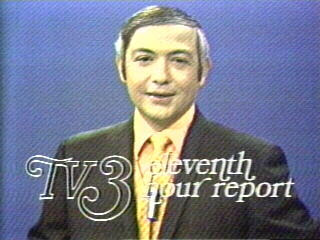 From Frank Macek at WKYC-TV 3 and his Director's Cut Blog. Virgil Dominic at the TV 3 News Set in the early 1970's.. 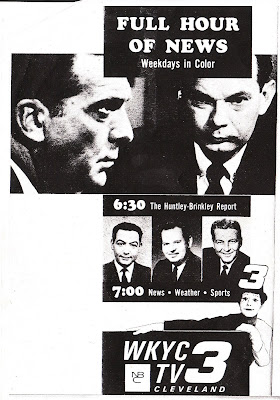 November 1967 TV Guide Ad for the WKYC-TV Newsteam at the time Including Chet Huntley and David Brinkley of NBC News, with Virgil Dominic, Wally Kinnan and Jim Graner. 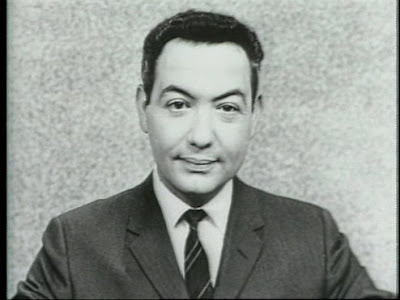 Screengrab of a Virgil Dominic photo from a WKYC Anniversary Show.

I would like to direct your attention today to Frank Macek's Director's Cut Blog...He has an outstanding "Where are they Now" post on Virgil Dominic, who was one of the finest Newsmen ever in Cleveland TV and by all accounts, a consummate gentleman, always kind to co-workers and employees and just a real class act. He was in Cleveland from 1965-72 as main news anchor at WKYC. He was then News Director and Anchor in Atlanta at WXIA-TV from 1972-77 where he led a young news team to the top of the ratings in Atlanta before returning to Cleveland in 1977 for a long stint as News Director, then General Manager at WJW-TV until just after the station was sold to FOX..He recently has returned to WKYC-TV as a consultant..

Link to The blog article:

An excellent read:The WKYC-TV News Team up to the early 1970's was always one of my favorites..


Ive featured this clip before but it is one of my all time favorites..in 1971, Wally Kinnan is surprised by a visit from one of his idols, Lawrence Welk. Virgil Dominic Introduces the segment, with Doug Adair and Jim Graner looking on..From Channel 3:50 Golden Years October 27, 1998
Posted by Tim Lones at 7:00 AM