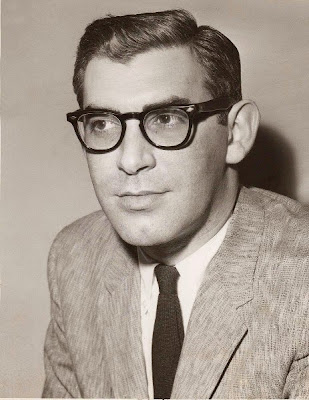 Undated photo of Alan Douglas, Producer of the "On Stage" program aired Tuesday Nights for 10 weeks in 1956..He later would be known as a radio and TV talk show host with "The Alan Douglas Show" on WEWS and later WKBF-61, and being the first host of the Morning Exchange in the first few months of 1972.
Courtesy Northeast Ohio TV Memories and The John Carroll University Archive..

When WEWS-TV 5 became an ABC affiliate March 2, 1955, it left hours of programming to fill, especially in the daytime. ABC was definitely a 3rd place network in the 1950's, and it wasn't that unheard of to routinely pre-empt network programs for syndicated or local offerings..Local news was also not as important as it would become later on..

With this in mind, Alan Douglas got the idea of a locally produced live "Play of the Week" WEWS agreed to open the Tuesday 11-12 Midnight time slot for Douglas. The show was called "On Stage" and it was sponsored, at least initially by Stern Brothers Plumbing Company.. 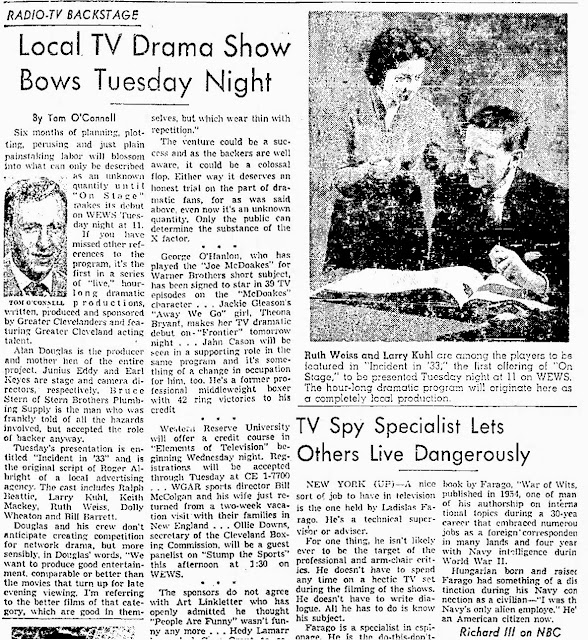 The idea was to make each play a completely local production, from writers to technical support to acting..Actors were drawn from The Cleveland and Lakewood Playhouse, as well as local print and broadcast media.  A particularly ambitious effort, considering that  the budget you could do on a local level was a mere percentage of what could be done on a network level by shows like Playhouse 90 and Studio One. 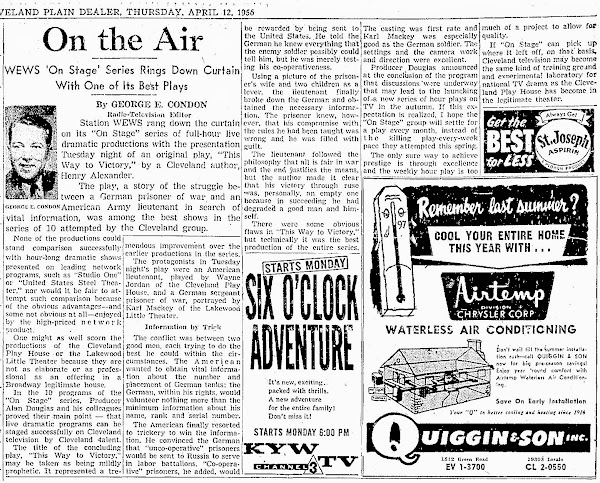 It was suggested by Condon that quality might be better if they just did one play a month rather than trying to do one a week, though On Stage never returned after it's 10-week run ended April 10, 1956.

Alan Douglas would be involved with another live TV effort on Channel 5 in Summer 1957..Johnny
McQueen, which lasted 9 weeks..

Here is an attempt at a episode guide finding out as much as possible about each production..Title, writers and actors. I used the Plain Dealer Archive and the Elyria Chronicle-Telegram through TV writer Dorothy Funk to get some info on 9 of the 10 episodes. Could not find anything on the April 3, 1956 program..