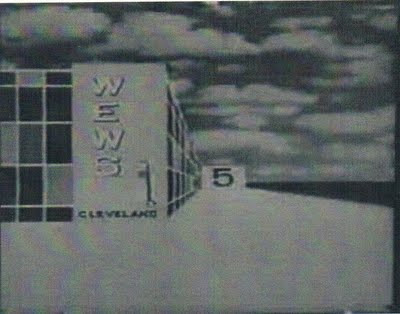 Copy of the "Classic" TV 5 station ID Logo from the 1960's-From a screencap of the opening to "Cleveland Comedy Company" a 1980 WEWS limited series..

Good morning:
I am pleased to announce that One of the friends of Cleveland Classic Media has found a real gem regarding local tv-Five and one half hours of WEWS-TV 5 audio from Friday, May 24, 1963..From just before 9AM-2:30 PM..Including all station breaks and commercials..Included programs:

This person has graciously allowed me to have a copy of the programming..My thoughts from listening to it..

One O Clock Club..Bill Gordon really ran the Show-He was the "traffic cop"..Could think on his feet-And he was so funny..Dorothy Fuldheim interacted with Bill some, but not as much as youd think..

Romper Room-Miss Plummer kept the show moving-Those kids were probably tired at the end of the half hour..

My plan at some point is to share some of this here and/or possibly Facebook or YouTube..Let me stress it may take some time to do with editing, etc..This was great to listen to-A virtual "time machine" of Cleveland Television..
Posted by Tim Lones at 9:59 AM