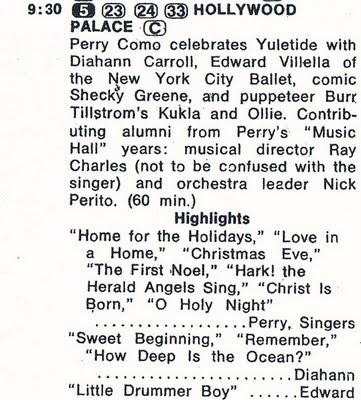 From December 20, 1969:Here is ABC's Hollywood Palace Christmas Show hosted by Perry Como, with Guests Dihann Carroll, Then starring in NBC's Julia, Comedian Shecky Greene, Edward Villella of the New York City Ballet, and Burr Tillstrom with Kukla and Ollie..(Shecky:Who'd you think I thought they were, Huntley and Brinkley?)..This hearkens back to the time of the "Christmas TV Special" when you had beautiful music and sometimes cheesy comedy..but most of us loved it..Perry here is at his easygoing best.as he reacts nicely to the goings on around him and sings some good songs as well..Commercials Included

Quick thanks for all the Birthday greetings from Facebook friends and especially Cliff (WIXYGrad) Feightner for mentioning my birthday in his blog..
Posted by Tim Lones at 11:29 AM