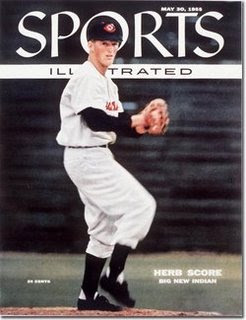 The Voice of Baseball in Cleveland has been silenced..

Herb Score,retired TV and Radio Broadcaster for the Cleveland Indians..Passed away this morning at the age of 75 after a long illness. He began in baseball as a promising left-handed pitcher for the Indians in the mid 1950's..An unfortunate accident on May 7, 1957 in which Score was struck in the eye by the Yankees' Gil McDougald, effectively limited his career. Though he came back to pitch, Arm problems eventually forced his retirement 1n 1964 after pitching for the Indians and Chicago White Sox. He immediately began his broadcast career on Indians Telecasts from 1964-67, then on radio from 1968-97..That era up until 1994 saw some of the worst Indians teeams, leading fellow broadcaster Joe Tait to comment "Herb has seen more bad baseball than anyone in Cleveland"..

To this longtime Indians fan (since 1970) it felt good to see Herb be able to broadcast some winners in the 1990's, including 2 world series teams (1995, 1997).Though sadly, neither won..Shortly after retiring, in 1998, Herb was involved in an auto sccident in New Philadelphia, Ohio that led to his longtime illness..

Prayers and good thoughts go out to the Score family, and to the Cleveland Indians Family at this time..